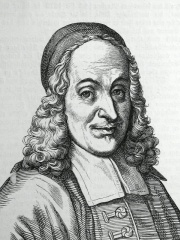 Philipp Jakob Spener (23 January 1635 – 5 February 1705), was a German Lutheran theologian who essentially founded what would come to be known as Pietism. He was later dubbed the "Father of Pietism". A prolific writer, his two main works, Pia desideria (1675) and Allgemeine Gottesgelehrtheit (1680), were published while he was the chief pastor in the Lutheran Church at Frankfurt. Read more on Wikipedia

Philipp Spener is most famous for his book Pia Desideria, which discusses the need for a new kind of Christianity.

Among religious figures, Philipp Spener ranks 854 out of 2,238. Before him are Saint Emeric of Hungary, Al-Juwayni, Peter Chrysologus, Gerard Majella, Sergius of Radonezh, and Avvakum. After him are Basil Fool for Christ, Anastasius of Persia, Antipope Laurentius, Antipope Honorius II, Dayananda Saraswati, and Aristides of Athens.