This page contains a list of the greatest French Actors. The pantheon dataset contains 10,030 Actors, 358 of which were born in France. This makes France the birth place of the 5th most number of Actors behind India and Canada.

The following people are considered by Pantheon to be the top 10 most legendary French Actors of all time. This list of famous French Actors is sorted by HPI (Historical Popularity Index), a metric that aggregates information on a biography’s online popularity. Visit the rankings page to view the entire list of French Actors. 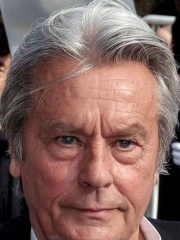 With an HPI of 85.85, Alain Delon is the most famous French Actor.  His biography has been translated into 83 different languages on wikipedia.

Alain Fabien Maurice Marcel Delon (French: [alɛ̃ dəlɔ̃]; born 8 November 1935) is a French actor and businessman. He is known as one of Europe's most prominent actors and screen sex symbols from the 1960s and 1970s. He achieved critical acclaim for roles in films such as Rocco and His Brothers (1960), Plein Soleil (1960), L'Eclisse (1962), The Leopard (1963), The Yellow Rolls-Royce (1965), Lost Command (1966) and Le Samouraï (1967). Over the course of his career Delon worked with many well-known directors, including Luchino Visconti, Jean-Luc Godard, Jean-Pierre Melville, Michelangelo Antonioni and Louis Malle. He acquired Swiss citizenship in 1999. 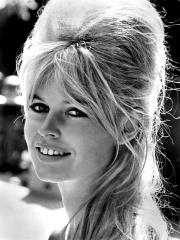 With an HPI of 84.41, Brigitte Bardot is the 2nd most famous French Actor.  Her biography has been translated into 111 different languages.

Brigitte Anne-Marie Bardot ( (listen) brizh-EET bar-DOH; French: [bʁiʒit baʁdo] (listen); born 28 September 1934), often referred to by her initials B.B., is a French animal rights activist and former actress and singer. Famous for portraying sexually emancipated personae with hedonistic lifestyles, she was one of the best known sex symbols of the 1950s and 1960s. Although she withdrew from the entertainment industry in 1973, she remains a major popular culture icon.Born and raised in Paris, Bardot was an aspiring ballerina in her early life. She started her acting career in 1952. She achieved international recognition in 1957 for her role in And God Created Woman (1956), and also caught the attention of French intellectuals. She was the subject of Simone de Beauvoir's 1959 essay The Lolita Syndrome, which described her as a "locomotive of women's history" and built upon existentialist themes to declare her the first and most liberated woman of post-war France. Bardot later starred in Jean-Luc Godard's film Le Mépris (1963). For her role in Louis Malle's film Viva Maria! (1965) she was nominated for a BAFTA Award for Best Foreign Actress. Bardot retired from the entertainment industry in 1973. She had acted in 47 films, performed in several musicals and recorded more than 60 songs. She was awarded the Legion of Honour in 1985 but refused to accept it. After retiring, she became an animal rights activist. During the 2000s, she generated controversy by criticizing immigration and Islam in France, and she has been fined five times for inciting racial hatred. She is married to Bernard d'Ormale, a former adviser to Marine Le Pen, France's main far-right political leader. 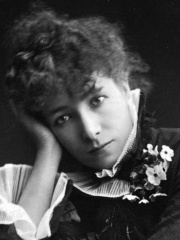 With an HPI of 83.05, Sarah Bernhardt is the 3rd most famous French Actor.  Her biography has been translated into 150 different languages.

Sarah Bernhardt (French: [saʁa bɛʁnɑʁt]; born Henriette-Rosine Bernard; 22 or 23 October 1844 – 26 March 1923) was a French stage actress who starred in some of the most popular French plays of the late 19th and early 20th centuries, including La Dame Aux Camelias by Alexandre Dumas, fils; Ruy Blas by Victor Hugo, Fédora and La Tosca by Victorien Sardou, and L'Aiglon by Edmond Rostand. She also played male roles, including Shakespeare's Hamlet. Rostand called her "the queen of the pose and the princess of the gesture", while Hugo praised her "golden voice". She made several theatrical tours around the world, and was one of the first prominent actresses to make sound recordings and to act in motion pictures. She is also linked with the success of artist Alphonse Mucha in giving him his “big break” in Paris. Alphonse Mucha would become one of the most sought after artist of this time for his art nouveau style. 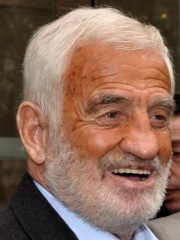 With an HPI of 81.30, Jean-Paul Belmondo is the 4th most famous French Actor.  His biography has been translated into 71 different languages. 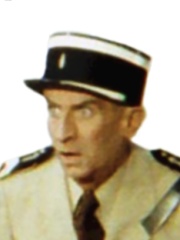 With an HPI of 81.13, Louis de Funès is the 5th most famous French Actor.  His biography has been translated into 74 different languages.

Louis Germain David de Funès de Galarza (French pronunciation: ​[lwi ʒɛʁmɛ̃ david də fynɛs də ɡalaʁza]; 31 July 1914 – 27 January 1983) was a French actor and comedian. According to several polls conducted since 1968, he is France's favourite actor – having played over 130 roles in film and over 100 on stage. His acting style is remembered for its high-energy performance and his wide range of facial expressions and tics. A considerable part of his best-known acting was directed by Jean Girault. Louis de Funès is one of the most famous French actors of all time, and even more so when it comes to his international celebrity. Besides his extreme fame in the French-speaking world he also still is a household name in places like Russia, Italy, Germany, Spain, Poland,Turkey, Iran, Greece, Israel, Albania, the former Yugoslavia, the Czech Republic, Slovakia, Hungary, Romania and Bulgaria. Despite this he remains almost unknown in the English-speaking world. He was exposed to a wider audience only once in the United States, in 1974, with the release of The Mad Adventures of Rabbi Jacob, which was nominated for a Golden Globe Award. 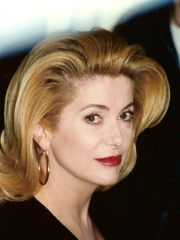 With an HPI of 79.73, Catherine Deneuve is the 6th most famous French Actor.  Her biography has been translated into 71 different languages.

Catherine Fabienne Dorléac (born 22 October 1943), known professionally as Catherine Deneuve (; French: [katʁin dənœv] (listen)), is a French actress as well as an occasional singer, model and producer, considered one of the greatest European actresses. She gained recognition for her portrayal of icy, aloof and mysterious beauties for various directors, including Luis Buñuel, François Truffaut and Roman Polanski. In 1985, she succeeded Mireille Mathieu as the official face of Marianne, France's national symbol of liberty. A 14-time César Award nominee, she won for her performances in Truffaut's The Last Metro (1980), for which she also won the David di Donatello for Best Foreign Actress, and Régis Wargnier's Indochine (1992). Deneuve made her film debut in 1957 at the age of 13 (12 when it was shot the previous year) and first came to prominence in Jacques Demy's 1964 musical The Umbrellas of Cherbourg. She went on to star for Polanski in Repulsion (1965) and for Buñuel in Belle de Jour (1967) and Tristana (1970). She was nominated for the BAFTA Award for Best Actress for Belle de Jour, and the Academy Award for Best Actress for Indochine. She also won the 1998 Volpi Cup for Best Actress at the Venice Film Festival for Place Vendôme. Her English-language films include The April Fools (1969), Hustle (1975), The Hunger (1983), Dancer in the Dark (2000) and The Musketeer (2001). Other notable films include Mississippi Mermaid (1969), Scene of the Crime (1986), My Favourite Season (1993), 8 Women (2002), Persepolis (2007), Potiche (2010), The Brand New Testament (2015) and Bonne Pomme (2017). 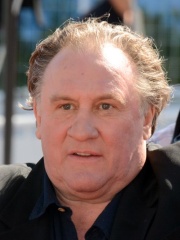 With an HPI of 79.53, Gérard Depardieu is the 7th most famous French Actor.  His biography has been translated into 78 different languages.

Gérard Xavier Marcel Depardieu (UK: , US: , French: [ʒeʁaʁ ɡzavje maʁsɛl dəpaʁdjø] (listen); born 27 December 1948), CQ is a French actor. He has received acclaim for his performances in The Last Metro (1980), for which he won the César Award for Best Actor, in Police (1985), for which he won the Volpi Cup for Best Actor, Jean de Florette (1986), and Cyrano de Bergerac (1990), winning the Cannes Film Festival for Best Actor, his second César Award for Best Actor, and his first Academy Award nomination for Best Actor. He co-starred in Peter Weir's comedy Green Card (1991), winning a Golden Globe Award and later acted in many big budget Hollywood movies including Ridley Scott's 1492: Conquest of Paradise (1992), Kenneth Branagh's Hamlet (1996), Randall Wallace's The Man in the Iron Mask (1998), and Ang Lee's Life of Pi (2012). He is a Chevalier of the Légion d'honneur and Chevalier of the Ordre national du Mérite. He was granted citizenship of Russia in January 2013 (officially adopted name in Russian: Жерар Депардьё, romanized: Zherar Depardyo), and became a cultural ambassador of Montenegro during the same month. 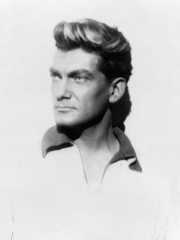 With an HPI of 77.96, Jean Marais is the 8th most famous French Actor.  His biography has been translated into 60 different languages.

Jean-Alfred Villain-Marais (French: [ʒɑ̃ maʁɛ]; 11 December 1913 – 8 November 1998), known professionally as Jean Marais, was a French actor, writer, director and sculptor. He performed in over 100 films and was the muse and lover of acclaimed director Jean Cocteau. In 1996, he was awarded the French Legion of Honor for his contributions to French Cinema. 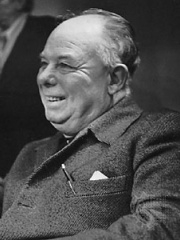 With an HPI of 77.17, Jean Renoir is the 9th most famous French Actor.  His biography has been translated into 63 different languages.

Jean Renoir (French: [ʁənwaʁ]; 15 September 1894 – 12 February 1979) was a French film director, screenwriter, actor, producer and author. As a film director and actor, he made more than forty films from the silent era to the end of the 1960s. His films La Grande Illusion (1937) and The Rules of the Game (1939) are often cited by critics as among the greatest films ever made. He was ranked by the BFI's Sight & Sound poll of critics in 2002 as the fourth greatest director of all time. Among numerous honours accrued during his lifetime, he received a Lifetime Achievement Academy Award in 1975 for his contribution to the motion picture industry. Renoir was the son of the painter Pierre-Auguste Renoir. He was one of the first filmmakers to be known as an auteur. 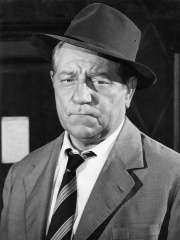 With an HPI of 76.93, Jean Gabin is the 10th most famous French Actor.  His biography has been translated into 68 different languages.

Pantheon has 358 people classified as actors born between 1692 and 1999. Of these 358, 218 (60.89%) of them are still alive today. The most famous living actors include Alain Delon, Brigitte Bardot, and Jean-Paul Belmondo. The most famous deceased actors include Sarah Bernhardt, Louis de Funès, and Jean Marais. As of October 2020, 58 new actors have been added to Pantheon including Alain Cuny, Jacques Charrier, and Renée Simonot.