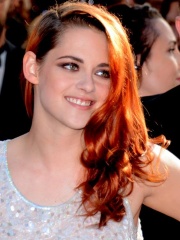 Kristen Jaymes Stewart (born April 9, 1990) is an American actress and filmmaker. The world's highest-paid actress in 2010 and 2012, she is the recipient of several accolades, including a BAFTA Award and a César Award, which she was the first American actress to win. Born and raised in Los Angeles to an American father and Australian mother, both of whom work in show business, Stewart first gained notice at age 12 for her role as the daughter of Jodie Foster's character in David Fincher's thriller Panic Room (2002), which earned her a Young Artist Award nomination for Best Leading Actress in a Feature Film. Read more on Wikipedia

Since 2007, the English Wikipedia page of Kristen Stewart has received more than 20,579,271 page views. Her biography is available in 79 different languages on Wikipedia making her the 1,594th most popular actor.