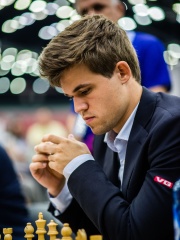 Sven Magnus Øen Carlsen (Norwegian: [svɛn ˈmɑ̀ŋnʉs øːn ˈkɑːɭsn̩]; born 30 November 1990) is a Norwegian chess grandmaster who is the current World Chess Champion, World Rapid Chess Champion, and World Blitz Chess Champion. Carlsen first reached the top of the FIDE world rankings in 2010, and trails only Garry Kasparov in time spent as the highest rated player in the world. His peak classical rating of 2882 is the highest in history. Read more on Wikipedia

Since 2007, the English Wikipedia page of Magnus Carlsen has received more than 6,149,985 page views. His biography is available in 73 different languages on Wikipedia making him the 86th most popular chess player.

Among CHESS PLAYERS In Norway

Among chess players born in Norway, Magnus Carlsen ranks 1. After him are Simen Agdestein (1967).