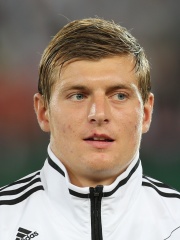 Toni Kroos (German pronunciation: [ˈtoːniː ˈkʁoːs]; born 4 January 1990) is a German professional footballer who plays for La Liga club Real Madrid and the Germany national team. Kroos plays mainly as a central midfielder, but is also used as a defensive midfielder or deep-lying playmaker. He is known for his vision, creativity, passing, and set-piece ability, and is widely considered to be one of the best midfielders in the world.Kroos began his senior club career playing for Bayern Munich, where he made his debut at age 17 in 2007. Read more on Wikipedia

Since 2007, the English Wikipedia page of Toni Kroos has received more than 4,100,658 page views. His biography is available in 67 different languages on Wikipedia making him the 488th most popular soccer player.