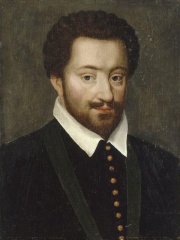 For information on the regent of the Netherlands, see Charles of Lorraine. Charles of Lorraine, Duke of Mayenne (26 March 1554 – 3 October 1611), or Charles de Guise, was a French nobleman of the house of Guise and a military leader of the Catholic League, which he headed during the French Wars of Religion, following the assassination of his brothers at Blois in 1588. Read more on Wikipedia

Page views of Charles, Duke of Mayennes by language

Among politicians, Charles, Duke of Mayenne ranks 4,101 out of 15,710. Before him are Blanche of Namur, Moinuddin Chishti, Khalil Sultan, Jean Jacques Régis de Cambacérès, François Tombalbaye, and Eumenes III. After him are Hypereides, Ernest I, Duke of Saxe-Gotha, Francesco Maria I della Rovere, Duke of Urbino, Erwin Piscator, Teispes, and Osroes I.

Among people born in 1554, Charles, Duke of Mayenne ranks 5. Before him are Pope Gregory XV, Elisabeth of Austria, Queen of France, Sebastian of Portugal, and Walter Raleigh. After him are Philip William, Prince of Orange, Philip Sidney, Bálint Balassi, Ernest of Bavaria, Louis III, Duke of Württemberg, Richard Hooker, and John Lyly. Among people deceased in 1611, Charles, Duke of Mayenne ranks 7. Before him are Charles IX of Sweden, Margaret of Austria, Queen of Spain, Henry Hudson, Tomás Luis de Victoria, Bartholomeus Spranger, and Eleanor de' Medici. After him are Katō Kiyomasa, Nicolas Henri, Duke of Orléans, Sanada Masayuki, Antonio Possevino, Jan Huyghen van Linschoten, and Christian II, Elector of Saxony.