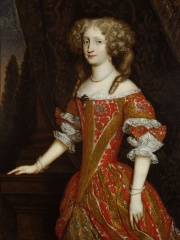 Eleonore Magdalene of Neuburg (Eleonore Magdalene Therese; 6 January 1655 – 19 January 1720) was a princess of the House of Wittelsbach who became Holy Roman Empress, German Queen, Archduchess of Austria, Queen of Hungary and Bohemia as the third and final wife of Leopold I. Before her marriage and during her widowhood, she led an ascetic and monastic life, translating the Bible from Latin to German and defended the Order of the Discalced Carmelites. Reputed to be one of the most educated and virtuous women of her time, Eleanore took part in the political affairs during the reign of her husband and sons, especially regarding court revenue and foreign relationships. Read more on Wikipedia

Eleanor Magdalene of Neuburg was a German princess and the youngest daughter of Philip William, Elector Palatine and his wife, Elisabeth Amalie of Hesse-Darmstadt. She was a great-granddaughter of King James I of England and granddaughter of King James II of England. Eleanor married her first cousin, Charles II, Duke of Mantua and Montferrat, who was the son of Charles I, Duke of Mantua and Montferrat, and Maria Gonzaga.

Page views of Eleonor Magdalene of Neuburgs by language

Among politicians, Eleonor Magdalene of Neuburg ranks 1,918 out of 15,577. Before her are Philippikos Bardanes, Cleopatra V of Egypt, Mongkut, Alec Douglas-Home, Anders Fogh Rasmussen, and Lothair II, Holy Roman Emperor. After her are Quintus Sertorius, Salome Zourabichvili, Abd al-Rahman II, Masoud Barzani, John I of Castile, and Ismail II.