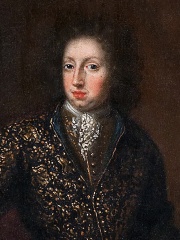 Charles XI (Swedish: Karl XI, also Charles IV and Carl; 4 December [O.S. 24 November] 1655 – 15 April [O.S. 5 April] 1697) was King of Sweden from 1660 until his death, in a period of Swedish history known as the Swedish Empire (1611–1721). He was the only son of King Charles X Gustav of Sweden and Hedwig Eleonora of Holstein-Gottorp. His father died when he was four years old, so Charles was educated by his governors until his coronation at the age of seventeen. Read more on Wikipedia

Page views of Charles XI of Swedens by language

Among politicians, Charles XI of Sweden ranks 896 out of 15,710. Before him are Julius Streicher, Nizam al-Mulk, Arthur Henderson, Antiochus IV Epiphanes, Pepi II Neferkare, and Michael I Rangabe. After him are Simeon I of Bulgaria, Lev Kamenev, Mahathir Mohamad, Michel Temer, Vlad II Dracul, and Guangxu Emperor.