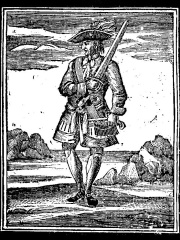 John Rackham (December 26, 1682 – November 18, 1720), commonly known as Calico Jack, was an English pirate captain operating in the Bahamas and in Cuba during the early 18th century. His nickname was derived from the calico clothing that he wore, while Jack is a nickname for "John". Rackham was active towards the end (1718–1720) of the "Golden Age of Piracy" which lasted from 1650 to 1725. Read more on Wikipedia

Calico Jack was a pirate who sailed the Caribbean Sea in the early 18th century. He is most famous for his involvement in the capture of the slave ship "The Concorde" in 1720.

Among pirates, Calico Jack ranks 7 out of 25. Before him are Hayreddin Barbarossa, Blackbeard, Henry Morgan, Eric of Pomerania, Alexander Selkirk, and Anne Bonny. After him are Mary Read, D. B. Cooper, Bartholomew Roberts, William Kidd, Henry Every, and Sextus Pompey.