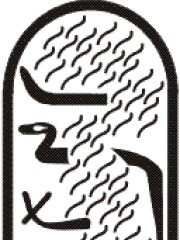 Hudjefa (Ancient Egyptian for "erased" or "missing") is the pseudonym for a 2nd Dynasty pharaoh as reported on the Turin canon, a list of kings written during the reign of Ramses II. Hudjefa is now understood to mean that the name of the king was already missing from the document from which the Turin canon was copied. The length of the reign associated to Hudjefa on the canon is 11 years. Because of the position of Hudjefa on the Turin list, he is sometimes identified with a king Sesochris reported in the Aegyptiaca, a history of Egypt written by the Egyptian priest Manetho in the 3rd century BC. Manetho credits this pharaoh with 48 years of reign. Read more on Wikipedia

Page views of Hudjefa IS by language

Among politicians, Hudjefa I ranks 9,498 out of 15,577. Before him are Leon Panetta, Gaius Antonius, Prince Andrew of Yugoslavia, Commius, Eriba-Adad I, and John II Orsini. After him are Lev Karakhan, Panteleimon Ponomarenko, Ahmad Shah of Pahang, Hans-Rudolf Merz, Gottfried, Prince of Hohenlohe-Langenburg, and Ğazı II Giray.