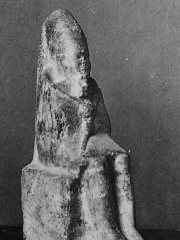 Menkauhor Kaiu (also known as Ikauhor and in Greek as Mencherês, Μεγχερῆς) was an Ancient Egyptian pharaoh of the Old Kingdom period. He was the seventh ruler of the Fifth Dynasty at the end of the 25th century BC or early in the 24th century BC ( circa 2399–2390 BC ). Menkauhor ruled for possibly eight or nine years, following king Nyuserre Ini, and was succeeded in turn by Djedkare Isesi. Read more on Wikipedia

Since 2007, the English Wikipedia page of Menkauhor Kaiu has received more than 148,576 page views. His biography is available in 34 different languages on Wikipedia making him the 2,455th most popular politician.