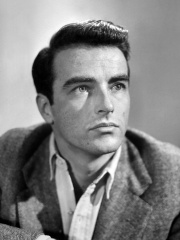 Edward Montgomery Clift (; October 17, 1920 – July 23, 1966) was an American actor. A four-time Academy Award nominee, he was known for his portrayal of "moody, sensitive young men", according to The New York Times.He is best remembered for his roles in Howard Hawks's Red River (1948), George Stevens's A Place in the Sun (1951), Fred Zinnemann's From Here to Eternity (1953), Stanley Kramer's Judgment at Nuremberg (1961), and John Huston's The Misfits (1961). Along with Marlon Brando and James Dean, Clift was considered one of the original method actors in Hollywood (though Clift distanced himself from the term); he was one of the first actors to be invited to study in the Actors Studio with Lee Strasberg and Elia Kazan. Read more on Wikipedia

Montgomery Clift was an American actor who is most famous for playing the role of a sensitive, introspective man in such films as A Place in the Sun, The Heiress, and From Here to Eternity.