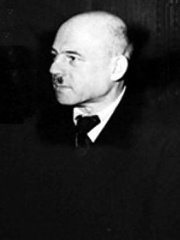 Ernst Friedrich Christoph "Fritz" Sauckel (27 October 1894 – 16 October 1946) was a German Nazi politician, Gauleiter of Gau Thuringia from 1927 and the General Plenipotentiary for Labour Deployment (Arbeitseinsatz) from March 1942 until the end of the Second World War. Sauckel was among the 24 persons accused in the Nuremberg Trial of the Major War Criminals before the International Military Tribunal. Read more on Wikipedia

Fritz Saukel is most famous for his work in the field of plant genetics. He was a German botanist and geneticist who was one of the first to explore the relationship between genetics and evolution. He is credited with being the first person to isolate and cultivate the tobacco mosaic virus.

Among politicians, Fritz Sauckel ranks 1,125 out of 15,710. Before him are Henry Clay, Al-Walid I, Chlothar II, Constantine III, Theodora Porphyrogenita, and Alauddin Khalji. After him are Manuel Noriega, Lothair of France, Gordian II, Valdemar II of Denmark, Börte, and David Lloyd George.