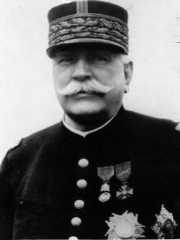 Joseph Jacques Césaire Joffre (12 January 1852 – 3 January 1931) was a French general who served as Commander-in-Chief of French forces on the Western Front from the start of World War I until the end of 1916. He is best known for regrouping the retreating allied armies to defeat the Germans at the strategically decisive First Battle of the Marne in September 1914. His political position waned after unsuccessful offensives in 1915, the German attack on Verdun in 1916, and the disappointing results of the Anglo-French offensive on the Somme in 1916. Read more on Wikipedia

Joseph Joffre was a French general who led the French army during World War I. He is most famous for commanding the French and British forces in the Battle of the Marne, which stopped the German advance on Paris.