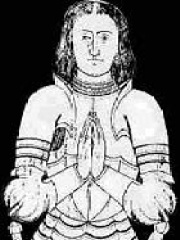 Edmund Tudor, 1st Earl of Richmond (Welsh: Edmwnd Tudur, 11 June 1430 – 3 November 1456, also known as Edmund of Hadham), was the father of King Henry VII of England and a member of the Tudor family of Penmynydd, North Wales. Born to Owen Tudor and the dowager queen Catherine of Valois, Edmund was half-brother to Henry VI of England. Edmund was raised for several years by Katherine de la Pole and Henry took an interest in Edmund's upbringing, granting him a title and lands once he came of age. Read more on Wikipedia

Since 2007, the English Wikipedia page of Edmund Tudor, 1st Earl of Richmond has received more than 828,233 page views. His biography is available in 22 different languages on Wikipedia making him the 4,651st most popular politician.

Among politicians, Edmund Tudor, 1st Earl of Richmond ranks 4,624 out of 14,801. Before him are Æthelberht, King of Wessex, Al-Adid, Edward Gierek, Vladislaus I, Duke of Bohemia, Philip William, Prince of Orange, and Ibbi-Sin. After him are Joseph Bech, Tiridates I of Armenia, James III of Majorca, Frederick II, Grand Duke of Baden, Antiochus VI Dionysus, and Modibo Keïta.