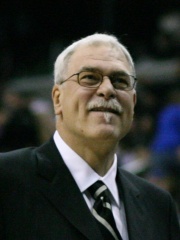 Philip Douglas Jackson (born September 17, 1945) is an American former professional basketball player, coach, and executive in the National Basketball Association (NBA). A power forward, Jackson played 12 seasons in the NBA, winning NBA championships with the New York Knicks in 1970 and 1973. Jackson was the head coach of the Chicago Bulls from 1989 to 1998, leading them to six NBA championships. Read more on Wikipedia

Since 2007, the English Wikipedia page of Phil Jackson has received more than 7,878,825 page views. His biography is available in 32 different languages on Wikipedia making him the 18th most popular coach.

Among COACHES In United States

Among coaches born in United States, Phil Jackson ranks 1. After him are Gregg Popovich (1949) and Flip Saunders (1955).