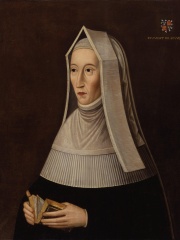 Lady Margaret Beaufort (usually pronounced: , BOH-fərt; or , BEW-fərt) (31 May 1441/3 – 29 June 1509) was a major figure in the Wars of the Roses of the late fifteenth century. A descendant of King Edward III, Beaufort passed a disputed claim to the English throne to her son, Henry Tudor. Capitalising on the political upheaval of the period, she actively maneuvered to secure the crown for her son. Read more on Wikipedia

Since 2007, the English Wikipedia page of Lady Margaret Beaufort has received more than 1,595,043 page views. Her biography is available in 34 different languages on Wikipedia making her the 4,327th most popular politician.

Among politicians, Lady Margaret Beaufort ranks 4,302 out of 14,801. Before her are Juan, Count of Montizón, Maria Kaczyńska, Grand Duke Alexander Mikhailovich of Russia, Ahmad ibn Tulun, Katsura Tarō, and Duchess Magdalene Sibylle of Prussia. After her are Jón Sigurðsson, Fruela II of Asturias, Sancho I of León, José María Morelos, Albert IV, Duke of Bavaria, and Antonio I, Prince of Monaco.