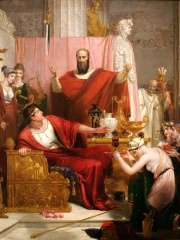 Damocles is a character who appears in a (likely apocryphal) anecdote commonly referred to as "the Sword of Damocles", an allusion to the imminent and ever-present peril faced by those in positions of power. Damocles was an obsequious courtier in the court of Dionysius II of Syracuse, a 4th-century BC ruler of Syracuse, Sicily. The anecdote apparently figured in the lost history of Sicily by Timaeus of Tauromenium (c. Read more on Wikipedia

Since 2007, the English Wikipedia page of Damocles has received more than 2,790,027 page views. His biography is available in 29 different languages on Wikipedia making him the 1,062nd most popular politician.

Page views of Damocles by language

Among politicians, Damocles ranks 1,057 out of 14,801. Before him are Nestor, Probus, Liu Shaoqi, Viktor Yanukovych, Park Geun-hye, and Henry Clay. After him are Balian of Ibelin, Lorenzo de' Medici, Duke of Urbino, Ptolemy V Epiphanes, Archduchess Marie Valerie of Austria, Ptolemy XII Auletes, and U Thant.