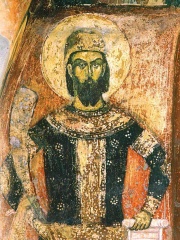 Marko Mrnjavčević (Serbian Cyrillic: Марко Мрњавчевић, pronounced [mâːrko mr̩̂ɲaːʋt͡ʃeʋit͡ɕ] (listen); c. 1335 – 17 May 1395) was the de jure Serbian king from 1371 to 1395, while he was the de facto ruler of territory in western Macedonia centered on the town of Prilep. He is known as Prince Marko (Serbian Cyrillic: Краљевић Марко, Kraljević Marko, IPA: [krǎːʎeʋit͡ɕ mâːrko]) and King Marko (Serbian Cyrillic: Краљ Марко; Bulgarian: Крали Марко; Macedonian: Kрaле Марко) in South Slavic oral tradition, in which he has become a major character during the period of Ottoman rule over the Balkans. Marko's father, King Vukašin, was co-ruler with Serbian Tsar Stefan Uroš V, whose reign was characterised by weakening central authority and the gradual disintegration of the Serbian Empire. Read more on Wikipedia

Prince Marko was a Serbian prince who was killed in the Battle of Kosovo in 1389.

Among politicians, Prince Marko ranks 1,883 out of 15,710. Before him are Afonso II of Portugal, Emperor Huizong of Song, Lucius Quinctius Cincinnatus, Canute IV of Denmark, Hongzhi Emperor, and Sancho I of Portugal. After him are Marie Thérèse Louise of Savoy, Princesse de Lamballe, Titus Tatius, Amasis II, Karl Hanke, Staurakios, and Aurelius Victor.

Among people born in 1335, Prince Marko ranks 3. Before him are Pope Gregory XII and Taejo of Joseon. After him are Mamai, Margaret of Bohemia, Queen of Hungary, and Princess Milica of Serbia. Among people deceased in 1395, Prince Marko ranks 2. Before him is Mary, Queen of Hungary. After him are Albert III, Duke of Austria, Konstantin Dejanović, Ivan Shishman of Bulgaria, Acamapichtli, Dabiša of Bosnia, Catherine of Bohemia, and Ramesuan.