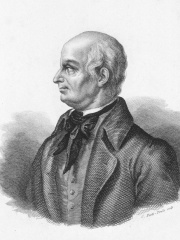 Lazzaro Spallanzani (Italian pronunciation: [ˈladdzaro spallanˈtsani]; 12 January 1729 – 11 February 1799) was an Italian Catholic priest (for which he was nicknamed Abbé Spallanzani), biologist and physiologist who made important contributions to the experimental study of bodily functions, animal reproduction, and animal echolocation. His research on biogenesis paved the way for the downfall of the theory of spontaneous generation, a prevailing idea at the time that organisms develop from inanimate matters, though the final death blow to the idea was dealt by French scientist Louis Pasteur a century later. His most important works were summed up in his book Experiencias Para Servir a La Historia de La Generación De Animales y Plantas (Experiences to Serve to the History of the Generation of Animals and Plants), published in 1786. Read more on Wikipedia

Lazzaro Spallanzani is most famous for his work in the field of reproductive biology. He is credited with discovering the role of seminal fluid in reproduction.

Among BIOLOGISTS In Italy