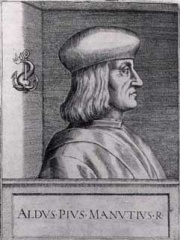 Aldus Pius Manutius (; Italian: Aldo Pio Manuzio; c. 1449/1452 – 6 February 1515) was an Italian printer and humanist who founded the Aldine Press. Manutius devoted the later part of his life to publishing and disseminating rare texts. His interest in and preservation of Greek manuscripts mark him as an innovative publisher of his age dedicated to the editions he produced. Read more on Wikipedia

He is most famous for inventing the italic typeface.

Among people born in 1449, Aldus Manutius ranks 2. Before him is Lorenzo de' Medici. After him are George Plantagenet, 1st Duke of Clarence, Axayacatl, Bona of Savoy, Mandukhai, Sidonie of Poděbrady, Catherine of Poděbrady, and Margaret of Thuringia. Among people deceased in 1515, Aldus Manutius ranks 4. Before him are Louis XII of France, Afonso de Albuquerque, and Meñli I Giray. After him are Alonso de Ojeda, Gonzalo Fernández de Córdoba, Bartholomew Columbus, Mariotto Albertinelli, Abraham Zacuto, Barbara of Brandenburg, Pietro Lombardo, and Barbara Zápolya.

Among DESIGNERS In Italy