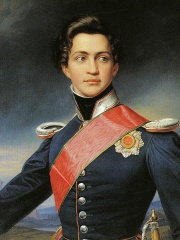 Otto (Greek: Όθων, romanized: Óthon, German: Otto Friedrich Ludwig von Bayern; 1 June 1815 – 26 July 1867) was a Bavarian prince who ruled as King of Greece from the establishment of the monarchy on 27 May 1832, under the Convention of London, until he was deposed on 23 October 1862. The second son of King Ludwig I of Bavaria, Otto ascended the newly created throne of Greece at age 17. His government was initially run by a three-man regency council made up of Bavarian court officials. Read more on Wikipedia

Otto of Greece is most famous for being the first king of modern Greece. He was also a prince of the House of Schleswig-Holstein-Sonderburg-Glücksburg, which was a branch of the House of Oldenburg. Otto was born in 1845 to King George I of Greece and Olga Konstantinovna of Russia. He ascended to the throne in 1863 after his father was deposed. Otto was overthrown in a coup in 1923.

Page views of Otto of Greeces by language

Among politicians, Otto of Greece ranks 1,667 out of 15,710. Before him are Hu Yaobang, Emperor Jing of Han, Agesilaus II, Anchises, Jean-Claude Juncker, and Toghon Temür. After him are Dzhokhar Dudayev, Antonio López de Santa Anna, Egon Krenz, Ptolemy VII Neos Philopator, Carlos I of Portugal, and Abu Ayyub al-Ansari.