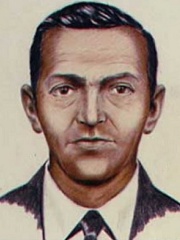 D. B. Cooper is a media epithet for an unidentified man who hijacked Northwest Orient Airlines Flight 305, a Boeing 727 aircraft operated by Northwest Orient Airlines, in United States airspace on November 24, 1971. During the flight from Portland, Oregon, to Seattle, Washington, the hijacker told a flight attendant he was armed with a bomb, demanded $200,000 in ransom, (equivalent to $1,338,000 in 2021) and requested four parachutes upon landing in Seattle. After releasing the passengers in Seattle, the hijacker instructed the flight crew to refuel the aircraft and begin a second flight to Mexico City, with a refueling stop in Reno, Nevada. Read more on Wikipedia

D.B. Cooper is most famous for being the only person to ever successfully jump out of a plane with a parachute and never be found.

Page views of D. B. Coopers by language

Among pirates, D. B. Cooper ranks 10 out of 25. Before him are Eric of Pomerania, Alexander Selkirk, Anne Bonny, Bartholomew Roberts, Calico Jack, and Mary Read. After him are William Kidd, François l'Olonnais, Sextus Pompey, Henry Every, Ching Shih, and Benjamin Hornigold.

Among PIRATES In United States