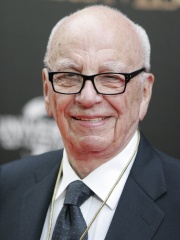 Keith Rupert Murdoch ( MUR-dok; born 11 March 1931) is an Australian-born American business magnate. Through his company News Corp, he is the owner of hundreds of local, national, and international publishing outlets around the world, including in the UK (The Sun and The Times), in Australia (The Daily Telegraph, Herald Sun, and The Australian), in the US (The Wall Street Journal and the New York Post), book publisher HarperCollins, and the television broadcasting channels Sky News Australia and Fox News (through the Fox Corporation). He was also the owner of Sky (until 2018), 21st Century Fox (until 2019), and the now-defunct News of the World. Read more on Wikipedia

Rupert Murdoch is most famous for being the founder of News Corporation, the company that owns Fox News.

Among BUSINESSPEOPLE In Australia

Among businesspeople born in Australia, Rupert Murdoch ranks 1. After him are Paul Stoddart (1955) and Gina Rinehart (1954).