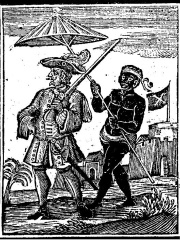 Henry Every, also known as Henry Avery (20 August 1659 – after 1696), sometimes erroneously given as Jack Avery or John Avery, was an English pirate who operated in the Atlantic and Indian oceans in the mid-1690s. He probably used several aliases throughout his career, including Benjamin Bridgeman, and was known as Long Ben to his crewmen and associates.Dubbed "The Arch Pirate" and "The King of Pirates" by contemporaries, Every was infamous for being one of very few major pirate captains to escape with his loot without being arrested or killed in battle, and for being the perpetrator of what has been called the most profitable act of piracy in history. Although Every's career as a pirate lasted only two years, his exploits captured the public's imagination, inspired others to take up piracy, and spawned works of literature. Every began his pirate career while he was first mate aboard the warship Charles II. Read more on Wikipedia

Among pirates, Henry Every ranks 14 out of 25. Before him are Calico Jack, Mary Read, D. B. Cooper, William Kidd, François l'Olonnais, and Sextus Pompey. After him are Ching Shih, Benjamin Hornigold, Charles Vane, Samuel Bellamy, Edward England, and Piet Pieterszoon Hein.