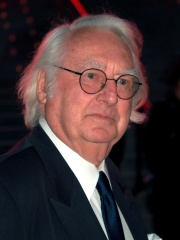 Richard Meier (born October 12, 1934) is an American abstract artist and architect, whose geometric designs make prominent use of the color white. A winner of the Pritzker Architecture Prize in 1984, Meier has designed several iconic buildings including the Barcelona Museum of Contemporary Art, the Getty Center in Los Angeles, and San Jose City Hall. Read more on Wikipedia

Richard Meier is most famous for his minimalist architectural style. He is best known for his public buildings, including the Getty Center in Los Angeles, the Barcelona Museum of Contemporary Art, and the Jubilee Church in Rome.

Among architects, Richard Meier ranks 53 out of 424. Before him are Carlo Maderno, Michelozzo, Rem Koolhaas, I. M. Pei, Jules Hardouin-Mansart, and Giacomo della Porta. After him are Kenzō Tange, Isidore of Miletus, Philip Johnson, François Mansart, Richard Rogers, and Álvaro Siza Vieira.