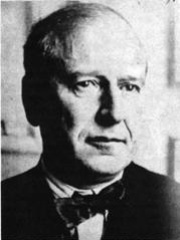 Christian Georgievich Rakovsky (Russian: Христиа́н Гео́ргиевич Рако́вский; Bulgarian: Кръстьо Георгиев Станчев, Христия́н Георги́ев Рако́вски; August 13 [O.S. August 1] 1873 – September 11, 1941) was a Bulgarian-born socialist revolutionary, a Bolshevik politician and Soviet diplomat and statesman; he was also noted as a journalist, physician, and essayist. Rakovsky's political career took him throughout the Balkans and into France and Imperial Russia; for part of his life, he was also a Romanian citizen. A lifelong collaborator of Leon Trotsky, he was a prominent activist of the Second International, involved in politics with the Bulgarian Workers' Social Democratic Party, Romanian Social Democratic Party, and the Russian Social Democratic Labour Party. Read more on Wikipedia

Christian Rakovsky is most famous for his role in the trial of Leon Trotsky in Mexico in 1937.

Among politicians, Christian Rakovsky ranks 3,269 out of 15,710. Before him are Henry II, Count of Champagne, Edvard Kardelj, Mihnea cel Rău, Anne, Princess Royal and Princess of Orange, Hamad bin Khalifa Al Thani, and Abdelmadjid Tebboune. After him are Eric II of Norway, Jean Moulin, Ramiro II of Aragon, Friedrich-Wilhelm Krüger, Margaret of France, Duchess of Berry, and Cylon of Athens.