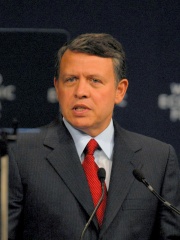 Abdullah II ibn al-Hussein is the King of Jordan. He is the son of King Hussein and grandson of King Abdullah I. He was born in Amman on January 30, 1962. Abdullah II is a graduate of the Royal Military Academy Sandhurst. He was proclaimed Crown Prince on October 2, 1999, and became King on February 7, 1999 following his father's death.

Page views of Abdullah II of Jordans by language

Among politicians, Abdullah II of Jordan ranks 2,261 out of 15,710. Before him are Harthacnut I of Denmark, Carlos Menem, Ólafur Ragnar Grímsson, Richard of Shrewsbury, Duke of York, Louis, Duke of Orléans, and Artur Axmann. After him are Ivan I of Moscow, William IV, Grand Duke of Luxembourg, Charles Emmanuel III of Sardinia, Bernardo O'Higgins, Miloš Obrenović, and Yaśodharā.