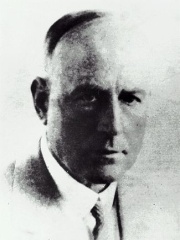 Frederick Griffith (1877–1941) was a British bacteriologist whose focus was the epidemiology and pathology of bacterial pneumonia. In January 1928 he reported what is now known as Griffith's Experiment, the first widely accepted demonstrations of bacterial transformation, whereby a bacterium distinctly changes its form and function.He showed that Streptococcus pneumoniae, implicated in many cases of lobar pneumonia, could transform from one strain into a different strain. The observation was attributed to an unidentified transforming principle or transforming factor. This was later identified as DNA. America's leading pneumococcal researcher, Oswald T. Read more on Wikipedia

Since 2007, the English Wikipedia page of Frederick Griffith has received more than 297,442 page views. His biography is available in 26 different languages on Wikipedia making him the 190th most popular physician.