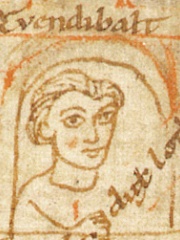 Zwentibold (Zventibold, Zwentibald, Swentiboldo, Sventibaldo, Sanderbald; c. 870 – 13 August 900), a member of the Carolingian dynasty, was the illegitimate son of Emperor Arnulf. In 895, his father, then king of East Francia, granted him the Kingdom of Lotharingia, which he ruled until his death. Read more on Wikipedia

Since 2007, the English Wikipedia page of Zwentibold has received more than 51,456 page views. His biography is available in 25 different languages on Wikipedia making him the 3,330th most popular politician.

Page views of Zwentibolds by language

Among people born in 870, Zwentibold ranks 4. Before him are Romanos I Lekapenos, Alexander, and Pope Leo V. After him are Lestek, Ebalus, Duke of Aquitaine, and Fulk I, Count of Anjou. Among people deceased in 900, Zwentibold ranks 2. Before him is Pope John IX. After him are Ono no Komachi, Donald II of Scotland, Leo the Mathematician, Nennius, Cynewulf, and Dicuil.