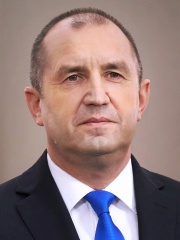 Rumen Georgiev Radev (Bulgarian: Румен Георгиев Радев; born 18 June 1963) is a Bulgarian politician and former major general who is the current President of Bulgaria since January 22, 2017. Radev previously served as Commander of the Bulgarian Air Force. Read more on Wikipedia

Since 2007, the English Wikipedia page of Rumen Radev has received more than 348,089 page views. His biography is available in 49 different languages on Wikipedia making him the 5,215th most popular politician.

Among politicians, Rumen Radev ranks 5,182 out of 14,801. Before him are Ermesinde of Carcassonne, Amadou Toumani Touré, Nicolas Catinat, Chadae of Goguryeo, Lakhdar Brahimi, and Qakare Ibi. After him are Sindae of Goguryeo, Burt Munro, Jair, Yaroslav II of Vladimir, Tarpeia, and Karl August von Hardenberg.