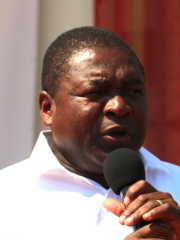 Filipe Jacinto Nyusi (Portuguese pronunciation: [fiˈlipɨ ʒɐˈsĩtu ˈɲusi]; born 12 February 1959) is a Mozambican politician serving as the fourth President of Mozambique since 2015. He is the current leader of FRELIMO, the party that has governed Mozambique since its independence from Portugal in 1975. Additionally, he has served as the Chairman of the Southern African Development Community since August 2020.During his time in office, President Nyusi has promoted peace and security, and signed multiple agreements with the main opposition parties, RENAMO, to bring a definitive and lasting peace to Mozambique.Nyusi served as the Minister of Defense from 2008 to 2014 under Armando Guebuza. He won the 2014 and 2019 Mozambican presidential elections as the candidate of FRELIMO. Read more on Wikipedia

Among politicians, Filipe Nyusi ranks 8,938 out of 15,577. Before him are András Hegedüs, Ciriaco De Mita, Shigenori Tōgō, Peter Ernst I von Mansfeld-Vorderort, Fredrik Reinfeldt, and Hierocles. After him are James I of Cyprus, Ashikaga Yoshihisa, Publius Decius Mus, Peng Zhen, Stefan Branković, and Josef Bürckel.