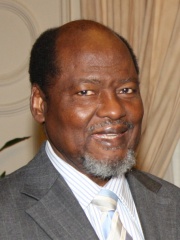 Joaquim Alberto Chissano (born 22 October 1939) is a politician who served as the second President of Mozambique, from 1986 to 2005. He is credited with transforming the war-torn country of Mozambique into one of the most successful African democracies. After his presidency, Chissano became an elder statesman, envoy and diplomat for both his home country and the United Nations. Read more on Wikipedia

Since 2007, the English Wikipedia page of Joaquim Chissano has received more than 177,115 page views. His biography is available in 47 different languages on Wikipedia making him the 4,282nd most popular politician.

Among politicians, Joaquim Chissano ranks 4,257 out of 14,801. Before him are Amadeus III, Count of Savoy, Gustav Noske, Ovadia Yosef, Ferdinand IV, Grand Duke of Tuscany, Cecily Neville, Duchess of York, and Maria of Alania. After him are Countess Palatine Dorothea Sophie of Neuburg, Akhmad Kadyrov, Ordoño II of León, Emperor Go-Saga, Sam Nujoma, and Franz Seldte.