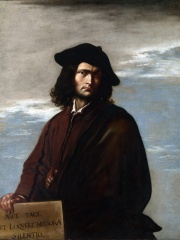 Salvator Rosa (1615 –1673) is best known today as an Italian Baroque painter, whose romanticized landscapes and history paintings, often set in dark and untamed nature, exerted considerable influence from the 17th century into the early 19th century. In his lifetime he was among the most famous painters, known for his flamboyant personality, and regarded as an accomplished poet, satirist, actor, musician, and printmaker, as well. He was active in Naples, Rome, and Florence, where on occasion he was compelled to move between cities, as his caustic satire earned him enemies in the artistic and intellectual circles of the day.As a history painter, he often selected obscure and esoteric subjects from the Bible, mythology, and the lives of philosophers, that were seldom addressed by other artists. Read more on Wikipedia

Salvator Rosa was a Baroque painter who is most famous for his paintings of landscapes.