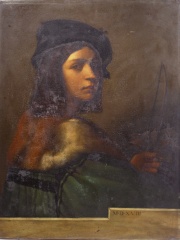 Sebastiano del Piombo (Italian: [sebaˈstjaːno del ˈpjombo]; c. 1485 – 21 June 1547) was an Italian painter of the High Renaissance and early Mannerist periods famous as the only major artist of the period to combine the colouring of the Venetian school in which he was trained with the monumental forms of the Roman school. He belongs both to the painting school of his native city, Venice, where he made significant contributions before he left for Rome in 1511, and that of Rome, where he stayed for the rest of his life, and whose style he thoroughly adopted.Born Sebastiano Luciani, after coming to Rome he became known as Sebastiano Veneziano or Viniziano ("Sebastian the Venetian"), until in 1531 he became the Keeper of the Seal to the Papacy, and so got the nickname del Piombo ("of the Lead") thereafter, from his new job title of piombatore. Read more on Wikipedia

Sebastiano del Piombo is most famous for his painting of the Transfiguration, which is now in the National Gallery in London.

Among people born in 1485, Sebastiano del Piombo ranks 7. Before him are Hernán Cortés, Catherine of Aragon, Giovanni da Verrazzano, Dragut, Thomas Cromwell, and Pedro de Alvarado. After him are Clément Janequin, Joos van Cleve, Johannes Bugenhagen, Wolf Huber, Balthasar Hubmaier, and Elizabeth of Denmark, Electress of Brandenburg. Among people deceased in 1547, Sebastiano del Piombo ranks 7. Before him are Henry VIII of England, Hernán Cortés, Francis I of France, Anne of Bohemia and Hungary, Vittoria Colonna, and Saint Cajetan. After him are Pietro Bembo, Pier Luigi Farnese, Duke of Parma, Hadım Suleiman Pasha, Marie of Luxembourg, Countess of Vendôme, Henry Howard, Earl of Surrey, and Johannes Schöner.