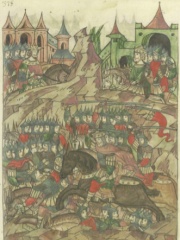 Nogai (died 1299/1300), also called Nohai, Nokhai, Nogay, Noqai, Ngoche, Noche, Kara Nokhai, and Isa Nogai, was a general and de facto ruler of the Golden Horde and a great-great-grandson of Genghis Khan. His grandfather was Bo'al/Baul/Teval Khan, the 7th son of Jochi. Nogai Khan was also a notable convert to Islam.Though he never formally ruled the Golden Horde himself, he was effectively the co-ruler of the state alongside whatever khan was in power at the time, and had unrestricted control over the portions west of the Dnieper. Read more on Wikipedia

Since 2007, the English Wikipedia page of Nogai Khan has received more than 138,892 page views. His biography is available in 28 different languages on Wikipedia making him the 2,491st most popular politician.

Among politicians, Nogai Khan ranks 2,474 out of 14,801. Before him are Rafic Hariri, Choe Yong-gon, Balthasar Charles, Prince of Asturias, Konstantin Päts, Herodes Atticus, and 5th Dalai Lama. After him are Abdrabbuh Mansur Hadi, Infante Carlos, Count of Molina, Julius Nyerere, Rudolf I of Bohemia, Toghrul, and Necho II.