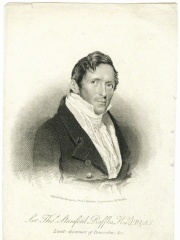 Sir Thomas Stamford Bingley Raffles, FRS (5 July 1781 – 5 July 1826) was a British statesman, Lieutenant-Governor of the Dutch East Indies (1811–1816) and Lieutenant-Governor of Bencoolen (1818–1824), best known for his founding of modern Singapore and the British Malaya. He was heavily involved in the conquest of the Indonesian island of Java from Dutch and French military forces during the Napoleonic Wars and contributed to the expansion of the British Empire. Read more on Wikipedia

Since 2007, the English Wikipedia page of Stamford Raffles has received more than 771,988 page views. His biography is available in 47 different languages on Wikipedia making him the 1,678th most popular politician.

Among POLITICIANS, Stamford Raffles ranks 1,678 out of 14,801. Before him are Maria Josepha of Bavaria, Empress Lü, Bao Zheng, Hassanal Bolkiah, Frederick Augustus I of Saxony, and Şah Sultan. After him are Seonjo of Joseon, Emperor Huizong of Song, Sancho I of Portugal, Harald Hardrada, Seljuk, and Johan de Witt.