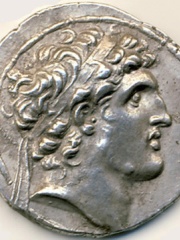 Alexander I Theopator Euergetes, surnamed Balas (Ancient Greek: Ἀλέξανδρος Βάλας, romanized: Alexandros Balas), was the ruler of the Seleucid Empire from 150/Summer 152 – August 145 BC. Picked from obscurity and supported by the neighboring Roman-allied Kingdom of Pergamon, Alexander landed in Phoenicia in 152 BC and started a civil war against Seleucid King Demetrius I Soter. Backed by mercenaries and factions of the Seleucid Empire unhappy with the existing government, he defeated Demetrius and took the crown in 150 BC. He married the princess Cleopatra Thea to seal an alliance with the neighboring Ptolemaic kingdom. His reign saw the steady retreat of the Seleucid Empire's eastern border, with important eastern satrapies such as Media being lost to the nascent Parthian Empire. Read more on Wikipedia

Alexander Balas is most famous for being the last king of the Seleucid Empire.

Among politicians, Alexander Balas ranks 3,132 out of 15,577. Before him are Emperor Hui of Jin, Plaek Phibunsongkhram, Aleksey Kuropatkin, Charles III, Duke of Parma, Emperor Taizu of Jin, and Jacobo Árbenz. After him are Junichiro Koizumi, Hayk, Prince George of Greece and Denmark, Yazid III, Jules de Polignac, and Charles Theodore, Elector of Bavaria.