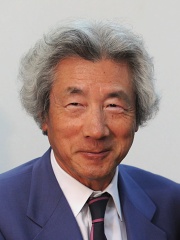 Junichiro Koizumi (; 小泉 純一郎, Koizumi Jun'ichirō [ko.iꜜzɯmi (d)ʑɯɰ̃.iꜜtɕiɾoː]; born 8 January 1942) is a Japanese politician who was Prime Minister of Japan and President of the Liberal Democratic Party (LDP) from 2001 to 2006. He retired from politics in 2009, and he remains the sixth-longest serving Prime Minister in Japanese history.He was often described as a "populist" or "right-wing populist". Widely seen as a maverick leader of the LDP upon his election to the position in 2001, he became known as a neoliberal economic reformer, focusing on reducing Japan's government debt and the privatisation of its postal service. Read more on Wikipedia

Junichiro Koizumi was the Prime Minister of Japan from 2001 to 2006. He is most famous for his reforms to the Japanese economy.

Among politicians, Junichiro Koizumi ranks 3,079 out of 15,710. Before him are Pedro Pablo Kuczynski, Deiphobus, Than Shwe, Władysław Gomułka, Lucius Vitellius the Elder, and Cayetana Fitz-James Stuart, 18th Duchess of Alba. After him are Isabella of Aragon, Duchess of Milan, Bardiya, Ivan Ribar, Frederick I, Elector of Brandenburg, Ivan Asen II of Bulgaria, and Dương Văn Minh.