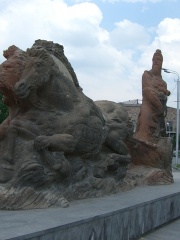 Argishti I of Urartu

Argishti I (Armenian: Արգիշտի Ա), was the sixth known king of Urartu, reigning from 786 BC to 764 BC. He founded the citadel of Erebuni in 782 BC, which is the present capital of Armenia, Yerevan. Alternate transliterations of the name include Argishtis, Argisti, Argišti, and Argishtish. Although the name is usually rendered as Argišti (read: Argishti), some scholars argue that Argisti is the most likely pronunciation. Read more on Wikipedia

Argišti of Urartu is most famous for its use of Urartian cuneiform, which was an adaptation of the Akkadian cuneiform script.

Page views of Argishti I of Urartus by language

Among politicians, Argishti I of Urartu ranks 3,105 out of 15,710. Before him are Charles II, Duke of Parma, Taishi Ci, Prem Tinsulanonda, Duchess Elisabeth of Württemberg, Karim Khan Zand, and Hasdrubal the Fair. After him are Catherine of Austria, Queen of Poland, Abimelech, Cao Huan, Memnon, Tantamani, and Philip William, Elector Palatine.

Others Deceased in 764 BC