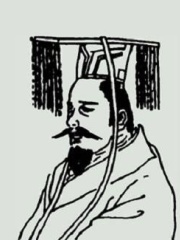 Emperor Hui of Jin (simplified Chinese: 晋惠帝; traditional Chinese: 晉惠帝; pinyin: Jìn Huì Dì; Wade–Giles: Chin Hui-ti; 259 - January 8, 307), personal name Sima Zhong (司馬衷), courtesy name Zhengdu (正度), was the second emperor of the Jin dynasty (266–420). Emperor Hui was a developmentally disabled ruler, and throughout his reign, there was constant internecine fighting between regents, imperial princes (his uncles and cousins), and his wife Empress Jia Nanfeng for the right to control him (and therefore the imperial administration), causing great suffering for the people and greatly undermining the stability of the Western Jin dynasty, eventually leading to rebellions of the Five Barbarians that led to Jin's loss of northern and central China and the establishment of the competing Sixteen Kingdoms. Read more on Wikipedia

Page views of Emperor Hui of Jins by language

Among politicians, Emperor Hui of Jin ranks 3,126 out of 15,577. Before him are Abdurrahman Wahid, Anastasio Somoza García, Louis II, Grand Duke of Hesse, Merenre Nemtyemsaf II, Taharqa, and Henri, Prince of Condé. After him are Plaek Phibunsongkhram, Aleksey Kuropatkin, Charles III, Duke of Parma, Emperor Taizu of Jin, Jacobo Árbenz, and Alexander Balas.