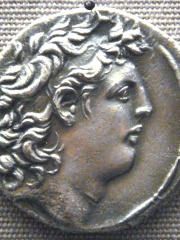 Diodotus or Trypho (Greek: Διόδοτος) was a king of the Hellenistic Seleucid Empire. Initially an official under King Alexander I Balas, he led a revolt against Alexander's successor Demetrius II Nicator in 144 BC. He rapidly gained control of most of Syria and the Levant. At first he acted as regent and tutor for Alexander's infant son Antiochus VI Dionysus, but after the death of his charge in 142/141 BC, Diodotus declared himself king. Read more on Wikipedia

Among politicians, Diodotus Tryphon ranks 4,510 out of 15,710. Before him are Ernak, Ranavalona III, Philip I of Macedon, John I, Duke of Brabant, Maximilien de Béthune, Duke of Sully, and Elena Glinskaya. After him are Muzio Attendolo Sforza, Wu Qi, Dieter Wisliceny, Ranavalona II, Marcus Terentius Varro Lucullus, and Franz Walter Stahlecker.

Others Deceased in 138 BC