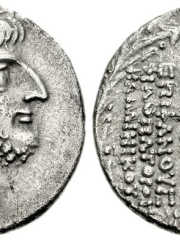 Antiochus XII Dionysus Epiphanes Philopator Callinicus (Ancient Greek: Ἀντίοχος Διόνυσος Ἐπιφανής Φιλοπάτωρ Καλλίνικος; between 124 and 109 BC – 82 BC) was a Hellenistic Seleucid monarch who reigned as King of Syria between 87 and 82 BC. The youngest son of Antiochus VIII and, most likely, his Egyptian wife Tryphaena, Antiochus XII lived during a period of civil war between his father and his uncle Antiochus IX, which ended with the assassination of Antiochus VIII in 96 BC. Antiochus XII's four brothers laid claim to the throne, eliminated Antiochus IX as a claimant, and waged war against his heir Antiochus X. By 87 BC, only two claimants remained, both brothers of Antiochus XII: Demetrius III and Philip I. The realm of Demetrius III was initially centered in Damascus but later extended over most of Syria. Demetrius III was defeated by Philip I and went into exile in Parthia, allowing Antiochus XII to gain control of Damascus while Philip I remained in the Syrian capital Antioch. Antiochus XII consolidated his territory within inner Syria and did not seek to expand into the territories of Philip I, who attempted to annex Damascus but was repulsed. Read more on Wikipedia

Among politicians, Antiochus XII Dionysus ranks 7,736 out of 15,710. Before him are Aleksandar Tsankov, Jan Assmann, Boril of Bulgaria, Edmund Veesenmayer, Temür Qutlugh, and Rim-Sin I. After him are Duchess Magdalene Sibylle of Prussia, Gustav, Duke of Zweibrücken, Aureolus of Aragon, Ordulf, Duke of Saxony, Íngrid Betancourt, and Catherine I, Latin Empress.

Others Deceased in 84 BC