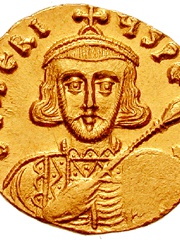 Tiberius III (Greek: Τιβέριος, romanized: Tibérios), born Apsimar (Latin: Apsimarus; Greek: Αψίμαρος, romanized: Apsímaros), was Byzantine emperor from 698 to 705 AD. Little is known about his early life, other than that he was droungarios, a mid-level commander, of the Cibyrrhaeots, and that his birth name was Apsimar. In 696, Tiberius was part of an army sent by Byzantine Emperor Leontius to retake the city of Carthage in the Exarchate of Africa, which had been captured by the Arab Umayyads. After seizing the city, this army was pushed back by Umayyad reinforcements and retreated to the island of Crete; some of the officers, fearing the wrath of Leontius, killed their commander, and declared Tiberius emperor. Read more on Wikipedia

Tiberius III was most famous for being the last Western Roman Emperor.

Among politicians, Tiberius III ranks 3,147 out of 15,577. Before him are Necho I, Francis IV, Duke of Modena, Ieng Sary, Eleanor of Toledo, Hans-Georg von Friedeburg, and Algirdas Brazauskas. After him are Cylon of Athens, Louis Auguste, Duke of Maine, Mauno Koivisto, Argishti I of Urartu, Hystaspes, and Eugenius.

Among people born in 700, Tiberius III ranks 12. Before him are Philippikos Bardanes, Dihya, Piruz Nahavandi, Theodosius III, Wahshi ibn Harb, and Ibrahim ibn al-Walid. After him are Abdullah ibn Saba', Paolo Lucio Anafesto, Plectrude, Wasil ibn Ata, Antipope Paschal, and Batbayan. Among people deceased in 705, Tiberius III ranks 4. Before him are Wu Zetian, Abd al-Malik ibn Marwan, and Pope John VI. After him are Lambert of Maastricht, Leontios, Alpaida, and Aldfrith of Northumbria.