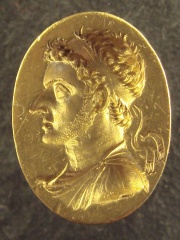 Ptolemy VI Philometor (Greek: Πτολεμαῖος Φιλομήτωρ, Ptolemaĩos Philomḗtōr; 186–145 BC) was a Greek king of Ptolemaic Egypt who reigned from 180 to 164 BC and from 163 to 145 BC.Ptolemy VI, the eldest son of King Ptolemy V and Queen Cleopatra I, came to the throne aged six when his father died in 180 BC. The kingdom was governed by regents: his mother until her death in 178 or 177 BC and then two of her associates, Eulaeus and Lenaeus, until 169 BC. From 170 BC, his sister-wife Cleopatra II and his younger brother Ptolemy VIII were co-rulers alongside him. Ptolemy VI's reign was characterised by external conflict with the Seleucid Empire over Syria and by internal conflict with his younger brother for control of the Ptolemaic monarchy. In the Sixth Syrian War (170–168 BC), the Ptolemaic forces were utterly defeated and Egypt was twice invaded by Seleucid armies. A few years after the Seleucid conflict ended, Ptolemy VIII succeeded in expelling Ptolemy VI from Egypt in 164 BC. The people of Alexandria turned against Ptolemy VIII and invited Ptolemy VI back to the throne in 163 BC. Read more on Wikipedia

Ptolemy VI Philometor is most famous for being the last king of the Ptolemaic dynasty. He was the son of Ptolemy V and Cleopatra II, and he ruled jointly with his mother from 180 BC to 164 BC.

Among politicians, Ptolemy VI Philometor ranks 1,351 out of 15,710. Before him are Cleopatra II of Egypt, Itō Hirobumi, Leo IV the Khazar, Christian V of Denmark, Empress Myeongseong, and Paul Barras. After him are Pepi I Meryre, Omar al-Bashir, Isabella Clara Eugenia, Léon Degrelle, Romanos II, and Scorpion I.