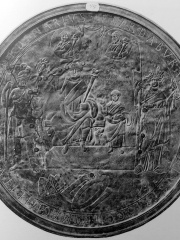 Flavius Ardabur Aspar (c. 400 – 471) was an Eastern Roman patrician and magister militum ("master of soldiers") of Alanic-Gothic descent. As the general of a Germanic army in Roman service, Aspar exerted great influence on the Eastern Roman Emperors for half a century, from the 420s to his death in 471, over Theodosius II, Marcian and Leo I, who, in the end, had him killed. Read more on Wikipedia

Since 2007, the English Wikipedia page of Aspar has received more than 84,176 page views. His biography is available in 30 different languages on Wikipedia. Aspar is the 2,190th most popular politician (up from 2,897th in 2019), the 279th most popular biography from Turkey (up from 322nd in 2019) and the 155th most popular Turkish Politician.

Page views of Aspars by language

Among politicians, Aspar ranks 2,190 out of 15,710. Before him are Twosret, Anne de Montmorency, Louis Philippe I, Duke of Orléans, Necmettin Erbakan, James II of Scotland, and Yazid II. After him are Victor Lustig, Amanullah Khan, Albert I, Prince of Monaco, Tarō Asō, Barsine, and Mohammad Khodabanda.

Among people born in 400, Aspar ranks 11. Before him are Pope Zosimus, Olybrius, Alexius of Rome, Joannes, Publius Flavius Vegetius Renatus, and Ermanaric. After him are Vasubandhu, Constantine III, Fritigern, Uldin, Marcomer, and Antipope Ursicinus. Among people deceased in 471, Aspar ranks 1. After him is Gennadius of Constantinople.