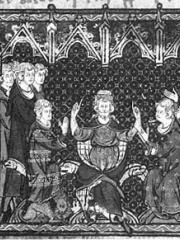 Carloman (between 706 and 716 – 17 August 754) was the eldest son of Charles Martel, majordomo or mayor of the palace and duke of the Franks, and his wife Chrotrud of Treves. On Charles's death (741), Carloman and his brother Pepin the Short succeeded to their father's legal positions, Carloman in Austrasia, and Pepin in Neustria. He was a member of the family later called the Carolingians and it can be argued that he was instrumental in consolidating their power at the expense of the ruling Merovingian kings of the Franks. Read more on Wikipedia

Since 2007, the English Wikipedia page of Carloman has received more than 17,152 page views. His biography is available in 35 different languages on Wikipedia. Carloman is the 1,803rd most popular politician (down from 1,323rd in 2019).

Carloman was the youngest son of Charlemagne and Hildegard. He was made co-emperor with his brother, Louis the Pious, by their father in 813. He was king of Italy and co-emperor from 817 until his death in 887.

Page views of Carlomen by language

Among politicians, Carloman ranks 1,803 out of 15,710. Before him are Sirimavo Bandaranaike, Princess Sibylla of Saxe-Coburg and Gotha, Michael V Kalaphates, Yu the Great, Fanny Kaplan, and Sanakht. After him are Archduchess Maria Elisabeth of Austria, Publius Clodius Pulcher, James IV of Scotland, Abd al-Rahman II, Sheikh Mujibur Rahman, and Sophia Alekseyevna of Russia.