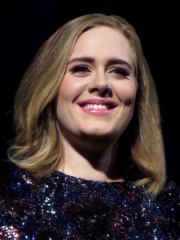 Adele Laurie Blue Adkins (; born 5 May 1988) is an English singer and songwriter. She is one of the world's best-selling music artists, with sales of over 120 million records. After graduating in arts from the BRIT School in 2006, Adele signed a record deal with XL Recordings. Read more on Wikipedia

CNN
Adele says meeting this celebrity would make her cry
Adele reveals that meeting Dwayne "The Rock" Johnson would make her "actually cry" during an interview with YouTube personality NikkieTutorials.
Stereogum
Extremely High Seth Rogen Was Confused To Be Front Row At Adele TV Special
Last month, before the release of her new album 30, Adele participated in a two-hour concert special called Adele: One Night Only, which was part Oprah interview and part filmed performance. That performance took place at Griffith Park Observatory in Los Ange…
James Rettig
The Guardian
Security, intimacy and money: why Adele is going to Las Vegas
Once a place ‘where careers go to die’, in Vegas you can see the big stars up close – and it makes sense for AdeleLas Vegas shows once conjured images of early-bird dinner specials, corny magicians and Cole Porter standards sung to happily clapping coach part…
Ben Beaumont-Thomas
Livejournal.com
The Power of Makeup featuring Adele
Adele sits down with YouTuber Nikki Tutorials to do her infamous The Power of Makeup challenge and drink some wine of course. The original video for this challege went viral and currently has over 42 million views. She has also done this challenge with Drew B…
penelopetaynt

Page views of Adeles by language