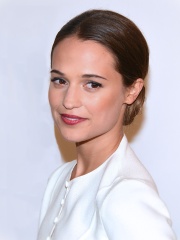 Alicia Amanda Vikander (, Swedish: [aˈlǐːsɪa vɪˈkʰanːdɛr] (listen); born 3 October 1988) is a Swedish actress. She is the recipient of such accolades as an Academy Award and a Screen Actors Guild Award, and has further been nominated for two Golden Globe Awards and three British Academy Film Awards. Born and raised in Gothenburg, Vikander began acting as a child in minor stage productions at the Gothenburg opera house and trained as a ballet dancer at the Royal Swedish Ballet School in Stockholm. Read more on Wikipedia

Since 2007, the English Wikipedia page of Alicia Vikander has received more than 22,167,445 page views. Her biography is available in 57 different languages on Wikipedia making her the 2,020th most popular actor.