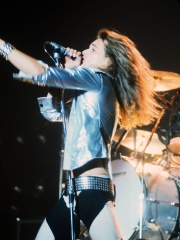 David Lee Roth (born October 10, 1954) is an American musician, singer, songwriter, actor, author, artist, and former radio personality. He is best known for his wild, energetic stage persona, and as the lead singer of hard rock band Van Halen across three stints, from 1974 to 1985, in 1996, and again from 2006 onwards. He was also known as a successful solo artist, releasing numerous RIAA-certified Gold and Platinum albums. Read more on Wikipedia

Since 2007, the English Wikipedia page of David Lee Roth has received more than 4,487,978 page views. His biography is available in 27 different languages on Wikipedia making him the 630th most popular singer.